This mod is intended as a library for other mods to make use of. As such it has no effect on a game when installed on its own. It provides a set of API functions and an administrative interface.

A waypoint type needs to be registered before the other methods in this mod can be used. waypoints_type is a unique string that will be used to reference this type of waypoint, and waypoints_def is a table with the following possible properties (all of which are optional):

Adds a new waypoint at pos. Fails if there's already a waypoint of that type at that location. Returns true on success, false on failure.

waypoint_data is a freeform table you can put whatever you want into (though it will be stored as a serialized string so don't get fancy if you can avoid it). There are three properties on waypoint_data with special meaning:

The same as add_waypoint, but if there's already a waypoint at pos then the values of any fields in waypoint_data will replace the corresponding fields in the existing waypoint.

Returns the waypoint_data of the waypoint at pos, or nil if there isn't one at that location.

Returns a table with values of {pos = pos, data = waypoint_data} for all waypoints in the region specified.

Deletes the waypoint at pos, if there is one. Returns true on success and false on failure.

The "/named_waypoints" chat command brings up an interface for use by server admins to view and edit waypoints: 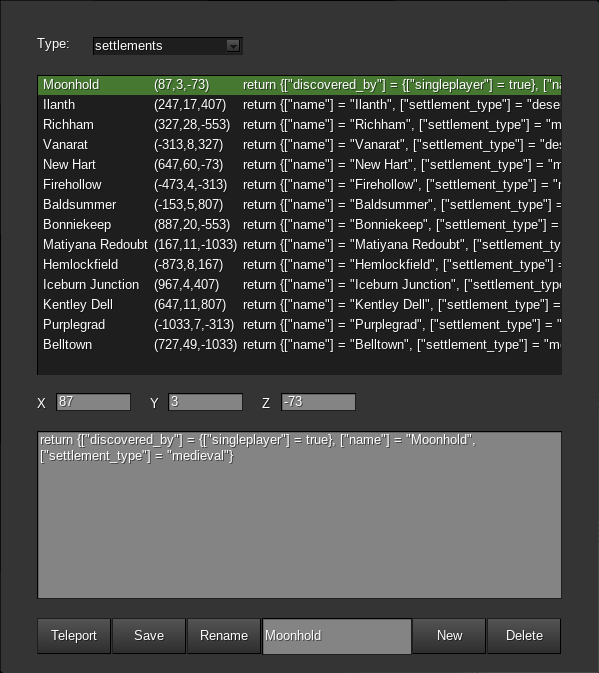 The "New" button creates a new waypoint at your current location with empty waypoint data.

Caution: This interface lets you access the guts of the data stored for each waypoint, only make edits if you know what you're doing. You can disrupt other mods that may be using waypoint data to store information. In the pictured example the "settlement_type" property is specific to the mod that is using named_waypoints, so changing or removing this value will cause undefined behaviour.

This mod is released under the MIT license.