Adds purely (audio-)visual ghosts of players you have killed that will haunt you at midnight.

All code written by Lars Müller and licensed under the MIT license.

Media (sound files) use different licenses, of which the most restrictive is CC BY 3.0: 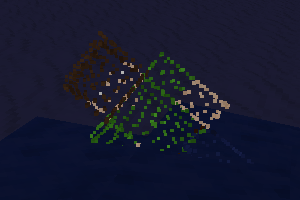 There are three mechanisms to display things in Minetest:

Projecting everything onto the HUD would mean more work for the server and would look pretty bad with lag; besides, this isn't needed here, so particles are used.

Other limitations are specific to the implementation:

Server-side texture packs aren't supported, as there's no proper API for getting their paths yet. You can however use a "texture pack mod" to override textures (and other media) - all you have to do is add all mods as (optional) dependencies of that mod, ensuring it loads last. You may want to have your mod rewrite it's mod.conf to achieve that:

Decrease in chance of ghost spawning per night

Particles per one metre (= node size)

Chance of a ghost spawning the first night

Spawns a ghost. Returns success: nil if spawning the ghost failed, true if it succeeded. params is a table with the following mandatory fields: